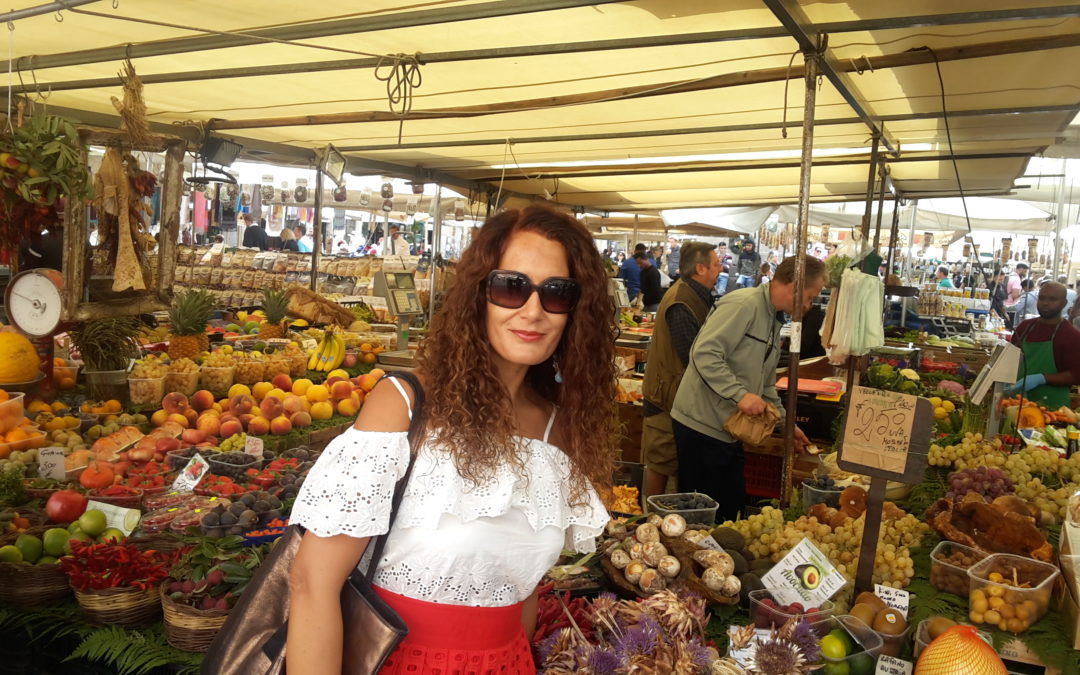 The area of Campo de’ Fiori has been pulsing with life since the age of Rennaisance when it started growing, but its name dates back to the Middle Ages and it’s ought to the field the area once was. This flower field later became a horse market and eventually the area was flooded by merchants and craftsmen of all trades and arts, which gave their names to the picturesque streets. These street names like the name of the ” Flower’s field ” are preserved till present time and along with the area around Piazza Navona they form the Rione district. An even though Novana outweights in grandeur, Campo de’ Fiori steals the show with its liveliness, its vivid colors and its picturesque alleys, the most beautiful ones in Rome!
For me a trip in Rome can’t be complete without at least one visit to this area. Even though the fruit, food and flower market that every morning is being set up around Giordano Bruno’s impressive statue is rather touristic these days, it remains an experience you have to live. But it’s truly incomplete without meandering around the really narrow alleys that spread from either sides. And the icing on the on the cake are the incredible delicacies from the traditional bakeries and other eateries in this area.
As the market is only open till midday, it’s better to visit the area in the morning when it’s in full swing and if you finish your walk by noon you can head to the Jewish Ghetto or cross Tiber and explore the lovely area of Trastevere.

The easiest way to reach στο Campo de’ Fiori is coming from Piazza Navona and then crossing Corso V. Emanuelle II avenue. The first big building you’ll see is the imposing, Renaissance Palazzo della Cancelleria. It’s listed as a World Heritage Site, belongs to the Holly See and often hosts interesting exhibitions. Even if you don’t visit one of them, you can still go into its courtyard and admire the two levels of elegant columns that came from the ancient theatre of Pompey that once stood close.
One block to the south, the market’s hustle and bustle indicates that you’ve arrived at The “Flowers’ Field “! Cross the market heading east, so you can start your day with a great coffee and a masterful sweet at Caffe Roscioli’s bench, right on Via dei Giubbonari . The Rosciolis are a bakers’ family that dominates the area with 4 deli stores! With professionalism and grace they will serve you the perfect espresso while you’ll be having a hard time choosing one of the sweets on display to accompany it with. Bite-sized masterpieces made of sugar, chocolate and cream in an endless variety!

On the opposite side, across the street, on Via dei Chiavari, the old street of locksmiths, you should also pay a visit to Antico Forno Roscioli and watch the huge, long shaped pizzas coming out of the oven and definitely try a slice of pizza rossa. Only then will you believe how much taste can be hidden in a simple tomato pizza! And no, it’s not too early for pizza, as you’ll realize yourself when you see how fast they sell out! Keep walking for a while along this beautiful street with the gorgeous honey-yellow buildings and pass by the following tiny squares: Largo dell Palaro, Piazza del Paradiso, Piazza del Teatro di Pompeo και Piazza del Biscione. Your compass will be Sant’ Andrea della Valle’s wonderful dome, the biggest in Rome after St’ Peter’s, which will be poping out of the tile roofs in every step.
This short circle will bring you back to the open market, so it’s now time for dawdling and shopping. Among the beautifully decorated benches the ones selling flowers stand out and even though products are not cheap bargaining is not an unusual custom. On offer you’ll find mostly fruit, vegetables, pasta, herbs, local cheese and cured meats. On the market’s west end, right behind the flower stalls, you’ll find another excellent bakery whose simple name is Forno Campo de’ Fiori. There are two things you should try here: apricot jam filled cookies and suppli, big fried rice balls filled with mozzarella cheese. Take away the cookies in a box and taste a rice croquette right there while it’s hot!

Exploring the cobblestones around the market

It’s now time to explore one of the Eternal City’s most beautiful streets… Via del Pellegnino, the old street of pilgrims, used to connect the papal palaces of Lateran and Vatican. The ochre colored buildings with ivy climbing on their walls, small shops, cafes and traditional restaurants form the perfect scenery for wandering around. Enjoy your walk all the way to the end of the street, where it meets Via dei Banchi Vecchi, Via di Monserrato and Vicolo della Moretta. It’s a gorgeous crossroad , where you’ll have the chance to see one of the oldest ancient inscriptions in Rome: at the end of Via del Pellegnino a marble plaque dating in 49 A.D. refers to the the city’s limits expansion. Keep walking along Via dei Banchi Vecchi where you’ll have the chance to see some wonderful Renaissance buildings with wrought iron doors, religious offerings built in house facades and one of the most beautiful buildings in the city, named Casa dei Pupazzi ( The house of puppets ). Its whole facade is covered in various reliefs: armors, shields, lion heads, grotesque figures, little angels, papal emblems and an inscription mentioning the name of the Milanese goldsmith to whom the palace belonged!

Once you reach the end of this road follow the same route to return to the market. Feeling hungry? Say yes!!! Next to the ancient plaque you saw before, there’s another excellent bakery with fantastic pizzas sold by piece, which you have to try! It’s called Forno Monteforte but outside the big sign reads “Panificio”. Since there are so many different pizzas to choose from, you can just have some slices of different ones. The staff will gladly heat them up for you and you might as well sit at on of the few tables and eat there. It’s certain that you’ll have a perfect casual meal!
Keep on walking on the same street until you come across a small junction with Via dei Cappellari, a beautiful, narrow alley which used to be full of hat makers and still holds the same name in honor of them. As you’ll be passing under arched buildings you’ll find it difficult to believe how such a quiet, small street can be so close to such a buzzing market. When you get back to Campo de’ Fiori you’ll notice that stalls are now fewer and as merchants begin to scatter, a young crowd takes their place. By afternoon all of the area’s bars and cafes will be filled with Romans and tourists who are out for the famous aperitivo.

An afternoon walk around Piazza Farnese

If you feel it’s time for another cup of coffee, then choose the elegant scenery of Piazza Farnese. The cafe on the corner which also serves tasty waffles, offers the best view of the square and what is considered Rome’s most exquisite Renaissance palace, with Michelangelo having taken part in designing it. The two fountains made of huge bath tubs brought to this site from Carakalla’s Baths and are decorated with lilies – the Farnese family emblem -make the scenery even more dreamy.
If you feel like walking a little more and exploring more beautiful streets, then after your coffee break head to the west side of Piazza Farnese. Start with a visit to Santa Brigida with the unusual bell tower. Right next to it, Via di Monseratto starts expanding with a continuous alternation of palaces, small squares and churches. Walk at least until you reach a small square called Piazza dei Ricci with another Renaissance palace which belonged to the noble Tuscan family of Ricci and stands out for its elaborate frescoes on the exterior.

Back to Campo de’ Fiori square and it’s now time to explore the old street of tailors,Via dei Giubbonari, where you had your morning coffee. As it is a street full of shops and always flooded by people, it’s one of the most vivid parts of this area and stretches to Piazza Cairoli and Via Arenula which separate Campo de’ Fiori and the area of Jewish Ghetto. If by the time you get there you still have 2-3 hours before sunset, then a great idea would be to get across to the other side of Piazza Cairoli and explore this beautiful area that is also full of sights and places of interest. Even though the Ghetto with its picturesque, tiny squares and its famous Jewish restaurants is particularly pretty as the night falls, it’s better to visit it for the first time at daylight and have the time to wander all around it.
Should you decide to stay at Campo de’ Fiori, make a detour to see the lovely, old street of booksellers, Largo dei Librari, and the small church dedicated to Santa Barbara where you can see a wonderful, big scale nativity scene.

If nightfall finds you still there and you’re looking for a good place to eat, keep in mind that the area is full of delicious options of all kinds. In my favourites list four of them stand out, each with its own unique character:
– Filetti di Bacalla – Dar Filettaro Humble and rustic, looks like a friggitoria ( fried food eatery ) you’d find in Naples and it’s the best place for fried cod fillets served wrapped in brown baking paper! For the most original experience combine your fish with a puntarelle salad, a traditional, intense taste of chicory with an anchovy-garlic sauce and a cold Italian beer! Better than any fish n’ chips dish you’d find in the U.K.! In this place you will certainly feel like a true Roman.
– Osteria Da Fortunata Whether you choose a table on the street or in one of the wooden paneled halls, it’s sure that you’ll have a perfect meal in a beautiful setting. Fresh pasta is prepared on spot from an Italian nona sitting among customers and served in custom made clay dishes. You’ll be licking your fingers with the strozzapreti alla carbonara!

– Ai Balestrari Campo de Fiori All of the cliche about Italians’ love for pasta are pictured on the walls of this trattoria. In a warm place with arched halls, shelves full of bottles of wine and bunches of dried red peppers hanging all around, well cooked pasta and thin, tasty pizzas are served on red and white checked tablecloths. Ask to be sited close to the wood-fired brick oven so that you can watch the pizzaiolo live in action.
– Roscioli Salumeria con Cucina The Roscioli family’s pride and joy is a modern salumeria-delicatessen-restaurant with an enviable cellar and most select Italian products. Dine there either for their fantastic charcuterie and cheese platters paired with wine, or for their amazing pasta. It’s advised to make a reservation about two weeks before your visit and for a more cozy experience ask for a table in the basement where the cellar is. It’s not too spacious and I’d say it’s not suitable for large groups or small kids and food of this quality is more expensive than average, but the quality of the carefully selected ingredients justifies the prices. It’s worth eating there at least once.