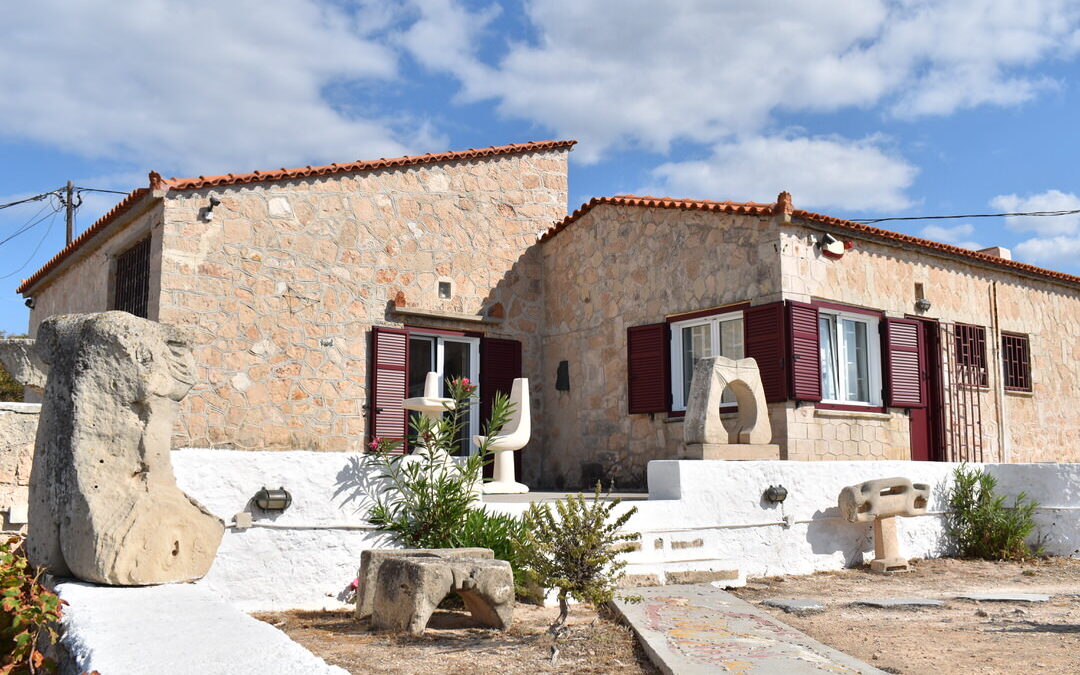 The beloved, and easily accessible from Piraeus port, island of Aegina is a popular destination for many reasons. Its lovely capital town has a characteristic neoclassical architectural style, its fishing villages are picturesque and have sandy, warm waters and its gastronomy is particularly interesting thanks to its signature product, the top quality Aeginetan pistachio. Moreover, Aegina town was the first capital of the free Greek State after the Independence Revolution of 1821, a fact that lead to the island’s cultural growth. This cultural evolution continued even though the capital was later moved to Nafplio and over its recent history the island attracted important personalities of the Greek civilisation, who chose to live for years on its land. Renowned poets, writers and besides them one of the most famous Greek sculptors, Christos Capralos, who set his workshop and residence – now a museum – in Aegina, the island that he loved so much. Bequeathing his beautiful seaside house to the Municipality of Aegina, today any visitor can become acquainted with the artist’s works in the same space where he created them, as his residence has been turned into a mostly interesting museum.

Christos Capralos was born in Agrinio in 1909 and was the son of a simple farmer, but with the support of wealthy citizens of his hometown managed to study painting at the Fine Arts University of Athens and then continued studying sculpting in Paris. Upon his return to Greece he lived in Agrinio and Athens, before finally moving to Aegina in 1963 where he set his workshop and spent his summers working until his death in 1993.

According to his own words, upon his return to his country, he left behind all European influences and turned to classicism, like the one of ancient Greek sculptures and lines. The main theme and focus of his work has always been the human being, as he used to say “My start point is my great love for humans and that’s what i’m trying to express”. Above all, the greatest love and main figure in his life has been his mother, a simple, uneducated country woman, whose support had been dicisive for both his beginnings and his whole career.

That’s why many of his works depict the figure of a mother, a universal and timeless symbol. Indeed, it’s a huge bronze statue of a woman figure, named “Mother” that indicates the location of the museum. The sculpture with the moving expression stands besides the coastal road in the area of Plakakia, just outside Aegina’s capital town.

On the opposite side of the road, the sculptor’s house and workshop are now the Capralos Museum, exhibiting some of his most important works, both sculptures and paintings. Even the garden, with the unobstructed view towards the calm, blue Saronikos Gulf, is filled with marble abstract sculptures and some of the mosaics he created, decorating the yard. The six interior spaces are arranged according to the the Capralos’ plan and showcase no less than 6.000 of his works, which also include terracottas, engravings and ceramics. The materials that inspired him are marble, wood, clay, plaster, metal and Aeginetan tufa stone, while his themes came from ancient Greece and include Cycladic figurines, warriors and heroes, centaurs, gods and goddesses. Particularly impressive are 500 large works, like “Mother of Christ” in wood and bronze, “Achilles and Hector” made of wood in 1972, “Crucifixion”, a wooden composition of five figures and “Apollo”, “Nike” and “Alpheaus river”, all made of wood in the period 1971-1972. The visitor will be amazed by both the large scale of the sculptures, but also the artist’s ability to move from expressionism to surrealism and futurism.

Moving on to another of his workshop’s spaces, we can admire his painting skills. An art form that the sculptor turned to from 1982 onwards, when he was older and sculpting wood and plaster had become more difficult for him. In this space, the paintings we admire are seascapes, self portraits, and mainly human forms, full of plasticity and volume. It’s obvious that they are a sculptor’s work and that Capralos brings once more humans in the center of his work.

Finally, a separate building in the back of the garden, houses what is perhaps his most important artwork, a true masterpiece of Greek modern sculpture, an ode to peace against war. It’s a frieze or zoohporus of monumental dimensions, measuring 40m in length and 1,10m in height, named “The Pindus Monument”. Capralos worked on tufa stone from Aegina to create seven units, whose theme evolves from peace to war and then to peace again. The narration begins with the first unit depicting Greek farmers accompanied by their wives, children and animals on their way to work in the fields. It’s a happy, traditionally Greek scene of peaceful times. The feeling reverses from the second unit with the declaration of war, the army that marches and people who are forced to leave their houses and villages behind. The climax comes in the third panel which shows a battle scene between Greeks and Italians, while the next unit refers to the end of the war, as we see soldiers reuniting with their families. The fifth unit shows us once again another aspect of the war, the occupation period, with people broken down, struggling to survive. The Resistance Movement is pictured in the sixth panel and finally the end of the war and the reconciliation of enemies comes in the last unit, leaving us with a sense of optimism, as we see people united by music and dancing. Apart from the work’s epic dimensions with the portrayal of 124 human figures, it’s striking how Capralos combines so naturally ancient and folklore elements and presents them with a minimalistic, modern look. This work is considered a legendary moment in the history of modern Greek sculpture and the original frieze is displayed in the colonnade of the Hellenic Parliament, while the one we see in Aegina is the plaster mold.

As we leave the museum and gaze once more the bronze statue of the “Mother” right in front of the seashore, we understand that Christos Capralos, the man whose artworks have traveled from the 1962 Biennale to Canada, USA and Brasil, was a genuinely talented artist whose individual creations are worth standing the course of time.