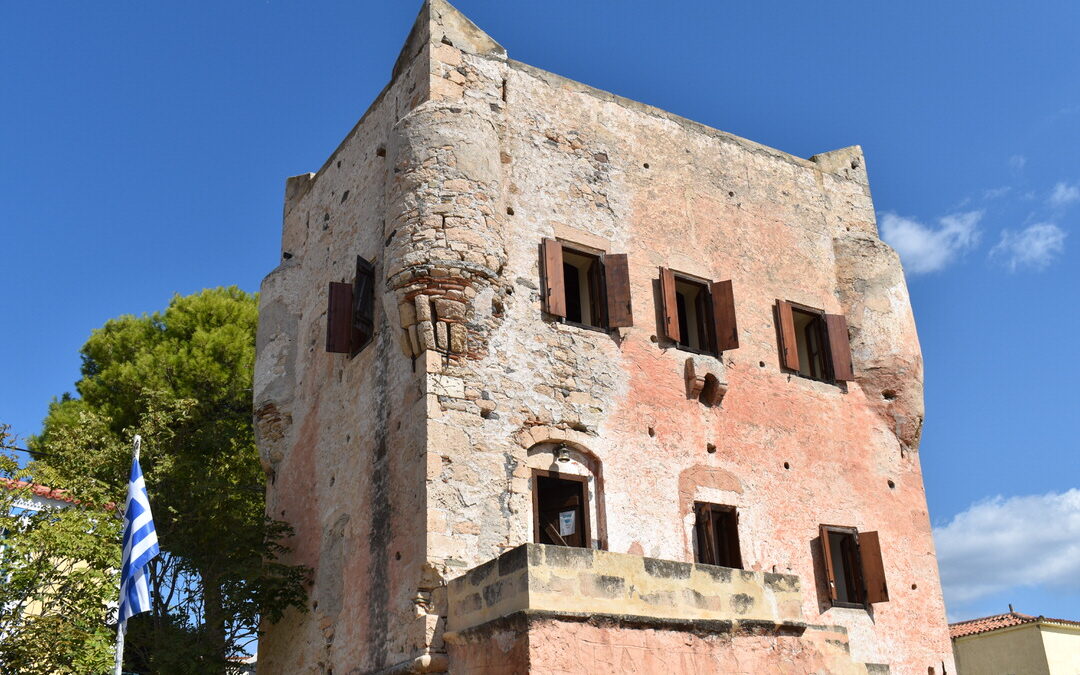 Although for most visitors Aegina is known as the closest to Athens island and the ideal getaway for a sunny weekend away from the big city, attracting yachtsmen, young couples and tourists alike, we must not forget that it’s also an island rich in history that stretches from ancient times to the era when Aegina’s town was declared the first capital of the newly founded free Greek state. And even a short visit to this beautiful island of Saronikos gulf, offers many chances to observe marks of its glorious past as Greece’s first capital, marks that are evident in the historic buildings that remain scattered all around Aegina’s town.
It was in 1827 when it was decided that it would be Aegina’s town the place where the first Greek governor should instate his administration temporarily, since Nafplio which was officially the first capital, was not safe enough yet. For the next two years under the government of I. Kapodistrias, Aegina flourished as the center of political, economic, educational, commercial and spiritual growth that brought prosperity to its residents.

It’s worth searching for marks of this 2-year period when the city was the central point of all the political activity of the Greek state and a walk around the narrow streets of Aegina’s town has a few charming secrets to reveal about those times.

Combine them with the observation of a few other historic buildings and houses of important Greek personalities and you’ll have a full view of the town’s most significant landmarks.

This large, simple, stone building with the wooden roof, that existed before Kapodistrias’ arrival on the island, was granted to the governor in order to house the administrative services. It also housed his office and was his residence for the period he stayed on the island. It’s behind these silent, light yellow walls, that the first decrees were signed, public services were organized and ministers were appointed. After Kapodistrias moved to Nafplio, the building changed many uses during the course of time and today the first floor houses the Municipal Library of Aegina, which is the only part of the building you can visit.

In accordance to Kapodistias’ belief that a truly free nation is an educated one, one of his main goals was to strengthen the national consciousness through establishing the educational system of the Greek state. Eynardeio was the first educational institution that operated not only in Aegina but in the whole freed Greek nation. It owes its name to a loyal friend of Kapodistrias, a Swiss, powerful banker at the time, who not only supported the governor’s view, but also financed the building of this first school. It was in fact a preparing faculty for future teachers, built in a purely neoclassical style, with a long portico and pediments adorning its narrow sides. Unfortunately, the school operated only for a few years, fell into decline and finally closed. Today it stands lifeless and abandoned, next to the Aegenetan metropolis, the first cathedral of the free Greek state. This is in fact another historic building, as Kapodistrias’ welcoming ceremony took place here, along with his first government’s oath taking to defend the constitution. Inside, you can even see his simple, wooden pew opposite the bishop’s throne.

Exploring Aegina town and strolling around the narrow streets that spread behind the port, holds an interesting, architectural surprise as you lay eyes on a dusty-pink tower that stands alone, surrounded by a few palm trees and old canons. The routes of this charming building are rather vague: Some believe that it was built in the 17th century as an observatory, forming a part of the fortifications erected by Francesco Morozini during the 2nd Venetian occupation of Aegina. In 1802 the tower was renovated by Spiridon Markellos ( some claim that it was actually built that year ), one of Aegina’s leaders during the Greek independence war and later member of the Greek parliament. Before Kapodistrias’ arrival to Aegina the tower had already been serving as a state building, while during the period he had settled on the island, the building housed the state offices of various members of the cabinet and even the Greek national treasury. In our times, the tower is usually closed and opens periodically for art exhibitions and cultural events.

The Greek independence war against the Turkish 400 year occupation found Aegina expanding, with a large number of Greek refuges from various parts of Greece settling on the island. Many important personalities from all aspects of public life chose Aegina as their place of residence, among them one of the most heroic men of the Greek revolution, Konstantinos Kanaris, known for blowing up the Turkish fleet in Chios island. His close relationship with Kapodistrias led to his designation as a commander of a naval squadron and was probably the reason he chose to live in Aegina for a short period. His residence, just off Heroon square, has been characterized a historic building and although it stands rather abandoned today, it’s noteworthy for its clear, neoclassical style. Its morphologic elements, like the tiled roof, the window frames and the wooden decoration under the roof’s architrave, are particularly noteworthy.

A noteworthy example of early 20th century architecture and house of renowned and unconventional Greek writer and poet, Nikos Kazantzakis, this beautiful island home stands on the northern coastal road that leads from Aegina town to Souvala, which is named after Kazantzakis too. Built by architect Vasilis Douros in 1937, in the area called Plakakia, it offers stunning views towards the sea and is a fine example of a building’s organic incorporation into the – rocky in this case – landscape. The famous poet used to call it his «Cocoon” and used it as a residence for more than a decade, on the island he loved so much. It was here where he wrote two of his most outstanding works, “Alexis Zorbas”, “Odyssey” and “Askitiki” and where he and his wife welcomed some of the most important Greek scholars and artists of his era. You will recognize the house by the bright blue windows and pergola and by a engraved rock on the stone fence, that reminds us it used to be the residence of such a brilliant mind.

From “Kyverneio”, to the tower of Markellos and Konstantinos Kanaris’ house, the town of Aegina, is full of historic buildings.