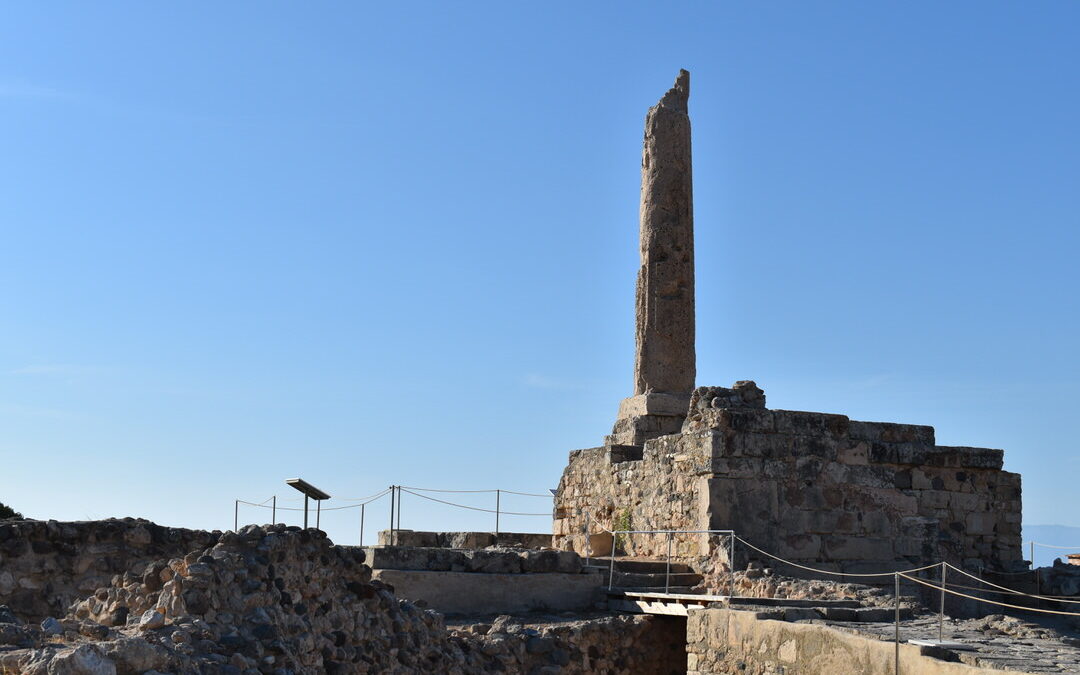 As ships and sailing boats reach the vivid port of Aegina, with the elegant neoclassical houses stretching behind the calm waters and the colourful fishing boats, the imposing ruins and a sole column of the ancient Temple of Apollo welcome the island’s visitors. Ancient Greeks certainly knew how to choose the ideal location for worshiping and honouring their gods and the site of Kolona ( the Greek word for column ), which overlooks the serene, endless blue of the Saronic Gulf, proves that this was also the case with Aegina. At this point, it’s useful to clarify that the peninsula had been given the name “Kolona” by Venetian sailors, who used the Doric columns of Apollo ‘s peripteral temple to guide them when approaching Aegina. A name still very suitable today.

Within just 5 minutes walk north of the port and town, a visitor can reach the soft hill where in the 6th century BC laid a rectangular temple dedicated to the ancient Greek god of music and light. It was built at a time when Aegina was flourishing as one of the most important trading centers and had risen to be a rival of the powerful city of Athens. Extensive walls and foundations discovered by archaeologists during excavations that are still in progress, prove that the hill’s location had been inhabited from prehistoric times through the classical period, with at least ten successive building phases. Archaic buildings, carefully built walls and Hellenistic fortifications, water reservoirs from Late Roman and Byzantine times, coexist in a charming scenery.

Walking up the hill, you find yourself surrounded by remains like a house complex on the south slope of the hill, an impressive cistern in the centre of the temple and the imposing wall on the north, built by materials coming from earlier buildings that contain many inscriptions. A cemetery has also been brought to light and the golden items and jewelry that were found in the tomps, are now exhibited in London, in the British Museum.

All of the remains stretch around the one erect column that overlooks the port, Aegina’s town and a secluded beach with crystal, clear waters. The scenery is both imposing and stunning.

Adding to the site’s importance and interest is the Archaeological Museum, established in 1898. Having been housed for many years at Kapodistias’ Governing Mansion, its collections were later moved to Aegina’s Central School, another historic building from Kapodistrias’ era, until 1981 when the museum permanently moved to its current location. The rather small but rich collection of pottery and sculpture is housed in three of the museum’s wings and also in the atrium, spanning across the whole period of Aegina’s history.

In the left room you will come across prehistoric ceramics, mostly handmade basins and cups and terracotta human figurines that show the contrast between these and the Cycladic marble ones. The central wind is dedicated to both Geometric and Archaic periods, with pottery that proves the intensive commercial activity of Aegina, while in the same wing one can also see Aegenitian plastic art that covers the period from 7th -5th century b.C. Moving forward in time,there are also other vessel forms with new decorative motifs that indicate the influence of Minoan civilization, models representing houses from the Early-Helladic period settlement of Kolona, a small scale reconstruction of the hill’s fortification from the 2nd century BC amphorae, jars and bone objects. Finally, the right wing houses pediment fragments from The island’s most famous archaeological site, the Temple of Aphea.

But what exceeds them all and is considered the collection’s outstanding exhibit is a statue of a Sphinx, a votive monument dating in the early classical period (460 BC ), which was dedicated to the Temple of Apollo. The unusual sculpture has the head of a woman while the body is half eagle and half lion and was found during the excavation works of 1903.

As a total, the collection demonstrates that Aegina has been the centre of one of the most well known schools of sculpture during archaic times and proves the continuity of the island’s cultural heritage from prehistoric to early Christian times. At the end of the visit, the visitor forms a complete view of the quality, evolution and uniqueness of Aegenitian art and the high cultural standards of this beautiful island.