San Domenico Maggiore: The church, the obelisk and the piazza 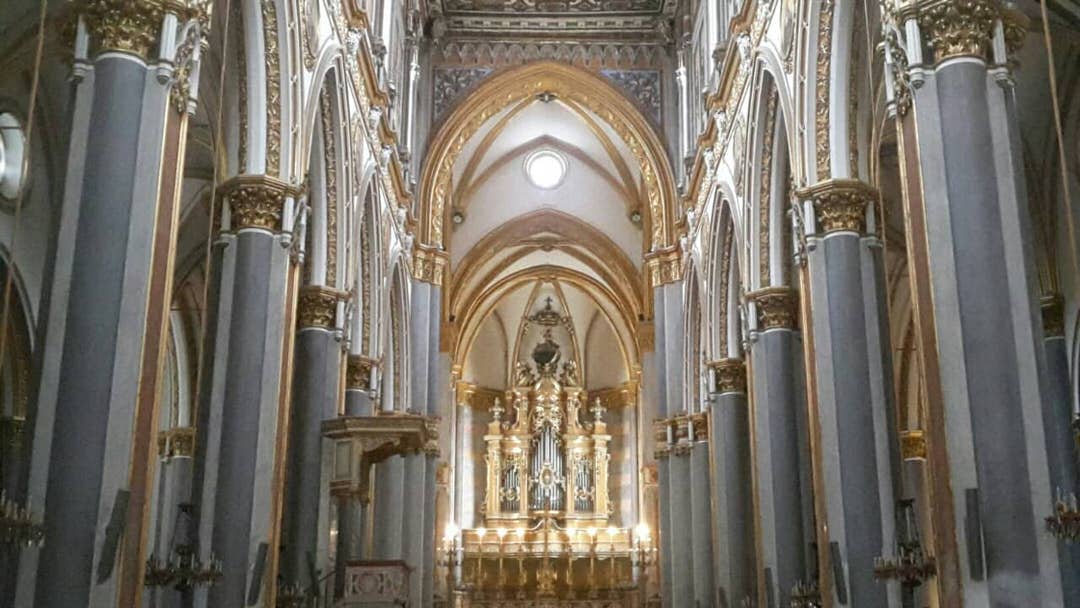 The area around Spaccanapoli, one of the three ancient Greek-Roman streets of the old Neapolis that still remain today, is a beautiful frame of narrow streets, cobble stoned alleys, tiny squares, many churches and old palaces. It is in fact one of the most picturesque aspects of the historic center of Naples and a very charming labyrinth, ideal for strolling around. Like with so many squares around Italy, in Naples too many squares take their name from a church located in them, and this is also the case with San Domenico Maggiore. Right on Spaccanapoli’s north-western border, the gothic church that was founded by the monks of the Dominican Order gives its name to Piazza San Domenico Maggiore, one of the busiest and most clearly bounded squares in the historic center’s dense network.

The gothic structure resembles of a small polygonal fortress and incorporates the first church that was built on this site in the 10th century.

Even though the church had undergone a modification in the baroque style in the 17th century, however it is the gothic style that is preserved till today. If you take a closer look, you can notice a monastery annexed to the basilica. This used to be the seat of the University of Naples and the esteemed place were philosophers Thomas Aquinas taught theology and Giordano Bruno once lived.

The impressive interior of the church

If you enter the church from the entrance on Piazza San Domenico Maggiore, you will find yourself at the old 10th century church which is now a side chapel, that of San Michele Arcangelo a Morfisa, at the end of the right nave. As you’ll realise that is not the main entrance of the church, if you wish to go through the main, more elegant entrance you’ll have to reach the north side of the church and pass through the small courtyard. The majestic interior, in light blue and golden tones, is as luxurious as you’d expect from a royal church. Indeed, there are 24 side chapels across the gothic apses which are ornamented with medallions portraying Dominican Saints, under the elaborate, paneled baroque ceiling. The whole of the church is full of treasures and sepulchers, connecting its history to that of the Aragonese royals. Among the most important works of art you can admire, are the high altar by the Cosimo Fanzago, the 16th century Neapolitan sculptor, Solimena’s frescoes in the ceiling of the sacristy depicting the “Triumph of Faith over Heresy” and the frescoes in the Brancaccio Chapel by the renowned Roman painter Pietro Cavallini.

The sacristy alone, in late brogue style, is a sight you shouldn’t miss, as it stands among the most important cultural attractions of the historic center. Under a vaulted ceiling, it houses a series of no less than 45 sepulchres of members of the royal Aragonese family. And what makes the visit to this part of the church even more impressive, is a gallery hosting a selection of precious clothes and accessories of kings and noblemen, reliquary busts, sacred vestments, and relics of Dominicans, all kept and displayed in 18th century walnut wardrobes. Clothing like damask dresses and veils, which were removed from mummies in their coffins, together with armor of the Aragonese family and court members recreate the culture of the 15th century in a vivid way, while silver and wooden saints’ busts carried in religious processions, take us back to the 18th century. The collection is completed by astonishing liturgical vestments from the Domenican friars and other reliquary and ornaments, objects and candelabra that once decorated the church. All, giving testimony to both the basilica’s importance as a worship place during Middle Ages, but also of Naples’ craftsmanship, especially in silk production and handmade clothing creation.

The piazza and the obelisk

Exiting the church, an ornate obelisk will draw your eyesight. If Rome is filled with Egyptian obelisks, constant reminders of the empire’s expansion and Rome’s role as “Caput mundi”, Naples’s characteristic are the obelisks and “guglie”, erected in memory of Saints’ help during difficult times that tormented the city. One of them is the Spire, Obelisco di San Domenico Maggiore, one of the three plague columns of Naples. This particular one, in a tall, pyramid shape, was erected after the 1656 epidemic and is adorned by Saint Dominic’s statue. The marble, heavily ornamented baroque design was by Cosimo Fanzago, the greatest baroque artist who worked in Naples, but his work was completed by Antonio Vaccaro many decades later, due to concerns about the preservation of the ruins of the ancient Roman city on site.

Finally, no visit to Piazza San Domenico Maggiore could ever be complete without a stop at another Neapolitan monument, a site of a different kind or art: Pasticceria Scaturchio, that has been creating some of the city’s best desserts since 1905.

Mingle with locals and tourists and try one the traditional, expertly created sweets like the rum soaked Babà, the chocolate covered Ministeriale, the Sfogliatella, the Pasticciera Napoletana, or the cream topped Zepolla. A mostly delightful break that will provide all the energy you need to keep exploring the rest of the numerous beautiful churches that frame the historic area of Spaccanapoli.