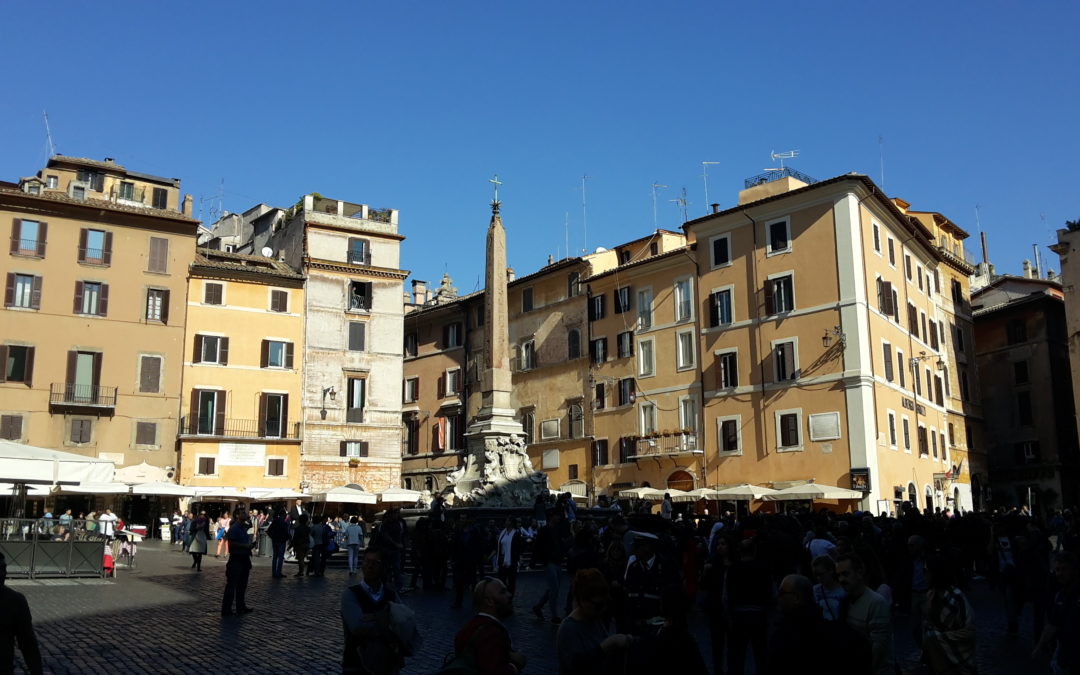 Renaissance facades, baroque luxury, illusionist frescoes, priceless religious relics and artistic treasures. The splendor and grandeur of Roman churches have no equal. The ones who don’t have enough time to visit the amazing Roman museums or are simply carried away by the hidden beauties of the city’s alleys and squares and don’t wish to miss a minute of that, don’t need to worry. By visiting some of the Rome’s exquisite churches they can see some top works of famous artists, comparable to the ones found in the museums. In my proposed walk with the gorgeous Piazza della Rotonda and the imposing Pantheon as a starting point, you’ll have the chance to visit 7 churches which can be considered as landmarks for Rome’s cultural wealth, either for their architecture or for the precious works housed in them.

Start your day the Italian way and follow the crowds of locals and tourists who gather at Tazza d’ Oro for the first espresso of the day. The café is situated literally a few steps from Pantheon, so place your order at the bar and enjoy Rome’s best and cheapest espresso.

The masters of baroque painting and architecture

Go back and cross Piazza della Rotοnda, heading west towards San Luigi dei Francesi, the national church of the French in Rome. This church which is normally guarded by armed soldiers has a facade in Renaissance style, decorated with statues of important personalities of French history. The interior in rich baroque style is impressive and seems bathed in a golden light. Among others the church is dedicated to king of France Louis IX whose sanctification is depicted on the ceiling’s fresco. The second chapel on the right contains Domenichino’s impressive frescoes of the life of Santa Cecilia. But what really attracts all crowds is the Contarelli chapel, the last one on the left, where you can admire Caravaggio’s tryptic of St Matthew: St Matthew’s calling, his martyrdom and St Matthew with the angel. Here the maestro of chiaroscuro is using dramatic colors to create realistic, dynamic depictions full of movement and intensity. The apotheosis of baroque painting!

From there head west and in the next square you’ll come across Piazza San Agostino and another elegant, Renaissance facade, the one of Sant’ Agostino. Climbing up an imposing, wide staircase will bring you at the entrance of a beautiful “basilica”, filled with works of art. The most impressive one being another one of Caravaggio’s paintings: the famous Madonna di Loreto, which had caused a lot of tumult with the far from idealistic depiction of the old and impoverished pilgrims with dirty feet. On the third pilaster on the nave’s left side, Raphael’s fresco of Prophet Isaiah stands out. Just below it, noteworthy is Sansovino’s sculpture of Virgin Mary, baby Jesus and St Anne. Also by Sansovino is the much loved sculpture Madonna del Parto, favourite pilgrimage of pregnant women and therefore full of flowers, candles and offerings.

A few meters from here you’ll come across the main street called Corso del Rinascimento. Pass in front of the imposing, elaborate facade of Palazzo Madama which houses the Italian Senate. It’s time to look above the rooftops. You’ll see a sophisticated, white, spiral dome that looks like a bee’s sting. It belongs to Borromini’s masterpiece, Sant’ Ivo alla Sapienza, in his recognizable style of the ingenious alternation of hollow and curved lines. This great work of baroque is situated in the yard of the Rome’s former University site ( Sapienza means knowledge ). The yard’s arched porticoes that surround the church intensify the theatrical effect and the genius hollow facade embodies the church to the oval shape of the yard. The simple interior opens only for a few hours that change often.

A break for a great coffee and a delicious snack

Exiting Sant’ Ivo turn right to the first alley and cool off in the little fountain called Fontana dei Libri on the side of Palazzo Sapienza. It embodies the area’s two symbols: books ( representing the university ) and a deer’s head ( symbol of the area of Sant Eustachio where you are ). This street leads to Piazza Sant’ Eustachio and the homonymus church. The restored, baroque design embodies a 12th century Romanesque style bell tower. Of particular interest is the top of the facade, with the symbol of St Eustachio, a deer and a cross. Legend has it than a roman paganist soldier had a vision of a deer with a cross between its horns during one of his huntings. He therefore became a Christian and a martyr.

You’ve completed half of your walk and it’s time for a break! Get one of the popular outside tables of Sant΄ Eustachio il Café in order to enjoy Rome’s best cappuccino! Order their famous Gran cappuccino or Gran café and enjoy a sense of “dolce vita” , while gazing at the crowds passing by and the queues lining up at the entrance of the café. Tiramisu is another coffee worth trying, or if you’re feeling more romantic ask for a Romeo e Giulietta. Don’t forget to visit the store inside for they signature selection of coffee accessories, coffee packages and fantastic tiny chocolate covered coffee grains.

You are right in the heart of “centro storico” and Pantheon were your walk started from, is only a few steps from here. So, if you head east you’ll find yourself at Piazza della Rotonda again. Feeling hungry yet? The ultimate choice for all foodies is Antica Salumeria, right on the square, under the beautiful fresco depicting Virgin Mary. I discovered this small place 15 years ago, when it was simply a butcher’s also selling cured meats and hams and where smiling gentlemen would make you a delicious sandwich with freshly cut prosciutto, the perfect mid-day snack. With a growing reputation, it mainly became a delicatessen, still selling wonderful sandwiches and a few sweets and biscuits. These days, in a space filled with hams and cheese from all over Italy, you can enjoy a delicious platter of their products along with a glass of wine at one of the few tables added. There will be all kinds of sausages hanging above your head and the smell of cheese will be tickling your nose. Of course, their fantastic sandwiches are still available and you must honor them!
Alternatively, on the next street, a narrow alley called Via Giustiniani, which connects Piazza della Rotonda and Piazza Navona, is super market Coop, where on the meat counter you’ll find a good variety of freshly made sandwiches with prosciutto, bresaola, spicy salami, cheese and rocket. Or, you may also give them your preferred combination of ingredients and they will prepare what you like. Everything is tasty and reasonably priced. Don’t forget to buy water or a fruit juice at super market prices. I go there every day for a fresh sandwich, the one with salami, provolone and rocket is my favourite one!

After regaining your strength, it’s time to explore the other side of Piazza della Rotonda, heading east of Pantheon. One of Rome’s newcomers’ favourite discovery is the beautiful Piazza della Minerva, where Bernini’s elephant scalpture drows all glances. On his back it carries one of the city’s 11 obelisks and it stands in front of Santa Maria Sopra Minerva. “Minerva” is a reference to the ancient, paganist temple of the goddess of wisdom that once stood on the same spot. Before entering, look at the wall on the right side of the entrance where there are signs pointing the water level during Tiber’s floods! But wait a minute…Gothic apses? Rosettes? in Rome? Indeed, it’s true! You’re in Rome’s only Gothic church. However, under the blue apses, the interior if full of Renaissance monuments and frescoes. It’s here where you’ll find Michelangelo’s exquisite statue of Christ with the cross – notice the bronze piece of clothing, a later addition for puritanism reasons. The Carafa chapel hosts Filippino Lippi’s gorgeous frescoes of Virgin Mary’s Annunciation and Ascension. The church is also filled with papal tombs along with the ones that belongs to Rennaisance’s famous painter, Fra Angelico and to Saint Catherine of Siena. On this site which used to be the seat of the Holy Inquisition,is where Galileo Galilei was forced to renounce his theory of earth rotating around the sun…

Around Piazza della Minerva spreads a labyrinth of picturesque alleys with gorgeous, small shops that is waiting to be explored by you. Turn right as you exit the church and you’ll find Via Santa Caterina da Siena. On the corner of Via del Pie di Marmo notice a giant, marble foot. It was a part of a roman statue that was found on the site and gave the street the name it has today. On the other side of the street, in Moriondo & Gariglio you’ll be enchanted by the aromas and flavors of their superb chocolates! Treat yourself a few of their delicacies, or buy a beautiful box as a gift for your beloved ones.

If you turn left now, you’ll come across a rococo masterpiece! The small but gorgeous Piazza Sant’ Ignazio, is designed with such theatrical detail that includes the balconies and railings of the surrounding buildings. This should give you a good idea of what you should expect of Sant’ Ignazio di Loyola, the glorious church dedicated to the founder of the Jesuits’ order in Rome. My favorite Roman church leaves me speechless each time, as it represents the ultimate triumph of baroque luxury… Side chapels are richly decorated with green marbles and huge lapis lazuli stones, but all eyes are attracted towards the ceiling and the amazing illusionist fresco by Andrea Pozzo. The three-dimensional tromp l’ oeil depicts Saint Ignatius’ entrance into heaven and all figures that surround him seem like they’re truly flying and disappear to the open sky. You should also look for the fake dome, which is in fact only a painted one, as there weren’t enough funds for its completion and so instead of being built it was only painted. On the floor there are signs showing you where to stand to better observe and enjoy all these illusions.

When you leave the church, the twirly alleys at the back of the square will lead you to another brilliant Roman monument, the Temple of Handrian on Piazza di Pietra. Its remaining columns are impressively lit during nighttime, while on the other side of the square, Salotto 42 is a tiny bar that gathers big crowds of elegant Romans for its cocktails, its atmosphere and its privileged location. If not for a cocktail then you may also have a break for a coffee here or even for afternoon tea served daily. Two blocks to the west, through another lovely square ( Piazza Capranica ), will bring you to your final stop. A tiny square – hardly looks like one! -called Piazza della Maddalena, and the equally small sized Santa Maria Maddalena. It has a impressive rococo facade, while the baroque interior is richly decorated.

As your tour ends here, it’s only right that after so much walking you deserve all the extra calories of a delicious, Italian gelato! In fact, you’re only a few steps from two of Rome’s best gelaterie – Gelateria della Palma and Giolitti , so your only dilemma should be which one to choose and what flavor to order…I have to admit the dilemma simply doesn’t exist for me…i always visit both!