Old Town Hall square: The charming setting for a walk through Corfu’s Venetian past 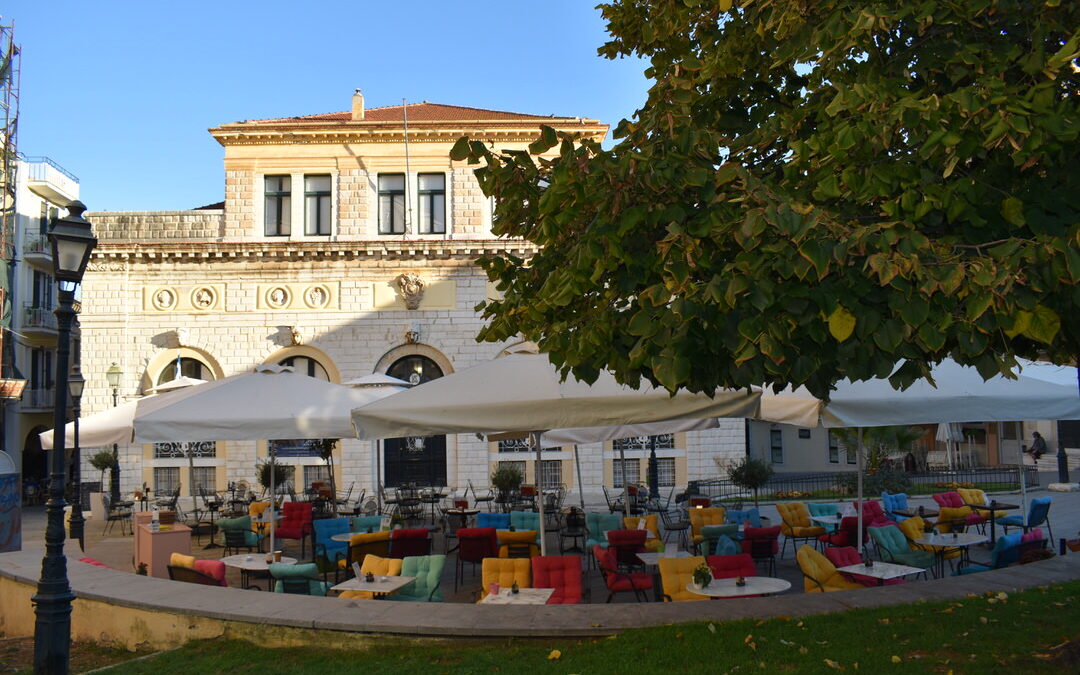 For all its visitors, one of the most enjoyable things they can do on the island of Corfu is strolling along the alleys of the old town, following the cobble stoned paths that lead from one fortress to the other, from the seaside streets to the dense frame of lanes that spread around churches and squares, forming the unique character of a charming city. And even though the old city’s feature that acts as a magnet for the crowd,s is the magnificent Liston with its elegant arches and Spianada, the largest square in the Balkans, you should not miss the picturesque setting of the Old Town Hall square, a picture perfect area flanked with buildings that bear witness of the city’s Venetian past.

With a rich history that puts it in the center of the social life of the Corfu’s Venetian era, it’s still a favourite meeting point for locals who choose it for a night drink in an elegant and carefree ambiance, but also for tourists who love the authentic atmosphere and the allure of the old buildings and narrow lanes that surround the square.

The slightly descending slope of the square intensifies the focus on the Old Town hall building as the center of the area. It’s one of the most imposing and elegant buildings of Venetian times, standing there for more than 3 centuries and giving its name to the square. Since its completion in 1691, it immediately became the most important meeting place of the Venetian and local noble society, serving as a Loggia di Nobili. Then, in 1720, it housed the lyric Theatre San Giacomo, taking its name from the catholic cathedral that also stands on the same square. It was the first Corfiot theatre and the centre of Greek opera and among the best lyric theatres of Europe, attracting famous Italian composers and performers for almost two centuries.

It hosted many operas plays by Antonio Vivaldi, in fact his “Juditha Triumphans” was first performed here and then at Milan’s La Scala. The acceptance of a performance at San Giacomo’s stage was considered to be a barometer for its course in other European theatres, as the expression “Aplausitto a Corfu” clearly shows. The lyric’s scene contribution to Corfiot’s love for music and to shaping the famous Ionian music culture as a mixture of Italy’s and Corfu’s music tradition, was a great one. Since 1903 when the theatre moved to another location, another floor was added to the building and it reopened as the Town Hall. The elaborate exterior decoration with engraved masks and historic scenes remains till these days, along with Corfu’s emblem above the building’s entrance.

Although the Town Hall is open to public only for state services, I had the privilege to be allowed and guided inside the main halls, in order to describe the interior’s grandeur on my blog. And indeed, there’s so much evidence of the building’s glorious past. The mayor’s office with the red carpet, the painted with frescoes ceiling and the carefully preserved old furniture is filled with portraits of important Corfiots, men and women that left their mark on the island and added to its cultural flourishing. From Nikolaos Mantzaros, the composer of the Greek national anthem, to many distinguished politicians and from Empress Elisabeth of Austria who commissioned the build of palace Achilleion, to count Ioannis Capodistrias, first governor of Greece, they are all there, giving life to Corfu’s rich history.

The room is also full of diplomatic gifts and tokens of Corfu’s close friendship and collaboration with other cities, but the one item that’s most proudly displayed is a document of the 1864, according to which the Ionian Senate accepts and confirms the unification of the Ionian islands with the new Greek state. In the Town Hall’s main corridor, a marble plaque narrates the building’s story and its various uses in the course of time.

The other impressive building on the square is the popular Catholic Cathedral, the Duomo or San Giacomo, the center of the catholic faith in Corfu, that took the place of the old Catholic Cathedral which was located inside the old fortress of Corfu town. And although it’s not certain when the new church was built on this site, historic facts show that it was severely damaged during the second Ottoman siege of the city in 1571 and rebuilt in the middle of the 17th century. The construction we see today, in the characteristic late baroque style of many Venetian churches, is a product of an exterior renovation that took place in the beginning of the 20th century.

The church stands out with its symmetrical layout, the adjacent tower and its tower bell, being almost as recognisable as that of Agios Spiridon, the patron saint of Corfu. The simple interior of the single-nave basilica with 3 chapels on each side, was renovated after being completely destroyed by a German bombing in 1943. If you happen to be in Corfu at Easter, it would be particularly interesting to attend the catholic service of Resurrection on Holy Saturday, in which the Duomo’s ecclesiastic organ also participates.

The third impressive building one notices framing the top of the square, is the former Residence of the Roman Catholic Archbishop. It was built in the 17th century, completed around the same time with the Duomo, and after a period that it served as a court, it now houses the Bank of Greece. You can best admire it from the center of the square, standing next to the bust of Iakovos Polylas, Corfiot writer and politician, but if you walk all the way up the wide staircase you will enjoy a panoramic snapshot of Corfu’s Venetian past unfolding before you.

Although the historic aspect of the square is defined by these marvelous Venetian buildings, it’s the rest of its charming elements, that form its unique character. A mixture of interesting shops, casual eateries, cafes and bars and of course the tall, narrow, pastel houses, with the bright bougainvilleas pouring out of the iron cast balconies.

I can’t help but mentioning first an all time favourite, the small bakery Starenio that stands in the northern corner of the square, on Guildford str. For years now, the always smiling owner and the friendly staff serve a big variety of delicious, homemade savory pies, Greek classics and others with imaginative stuffing combinations, at the small tables that spread on the pedestrianised street. It’s a lovely tiny spot and a great idea for breakfast, when the atmosphere around is still quite peaceful. Along with your coffee or juice you may try their homemade biscuits and cookies, or even one of the daily desserts. The location is great for an overall view of the square and lazing about passers by and merchants of the area that open their shops for the day.

The shop that will definitely catch your attention almost next to Starenio bakery is the wonderful flower shop Lily Fleur, a lovely place for flower gift ideas, with bunches and bouquets of fresh and dried flowers beautifully arranged along a wooden bench, outside the shop.

Generally, Guildford str. is one of the most picturesque pedestrian streets of Corfu’s old town, with ivy brunches climbing house walls and stretching across balconies, many dining options and artistic shops and designer’s workshops, where you can buy unique clothes, handmade accessories and attractive decorative items.

Walking back towards the square again, make sure you’re hungry enough for a sweet delight at Stazei meli, translating “Dripping honey” and indeed this little eatery does just that! It’s a small café specialising in deep fried, bite sized doughnuts, which have a long tradition as a sweet treat in Corfu. Their Greek name is “loukoumades” and apart from being a popular dessert all over Greece, here they are also closely associated to the celebrations of the island’s patron saint, as Corfiots would eat loukoumades before the vigil that was organized in the church of Saint Spyridon on the night before the saint’s feast day. Traditionally they are served with honey, cinnamon and chopped walnuts, but Stazei meli offers a long menu of various choices for a truly delicious indulgence. You may start with a savory version and finish with an extra loaded sweet portion of doughnuts either stuffed or covered with chocolate, cream, marmalade and many more extras too.

As the sun descents and night falls, the Old Town Hall square acquires a whole new beam, with its elegantly lighted buildings and the popular bars that spread their tables and colourful sittings in front of the Town Hall building. Especially at spring and summer time, when young crowds sit even on the flower filled stairs, enjoying their drinks and the happy vibe, you can’t go wrong with choosing this setting of old Venetian charm to close your day in the gorgeous, old town of Corfu.