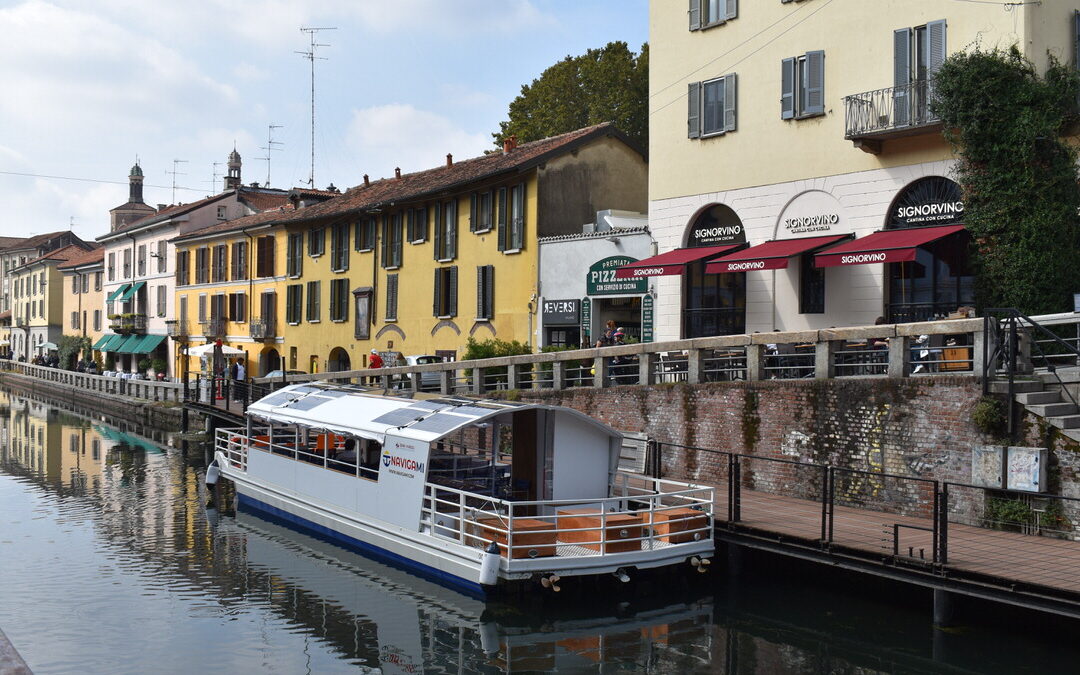 Surely, the first city that comes in our mind when we’re talking about a city with canals is majestic Venice. The same way, when one mentions Milan, the first thing that comes in our mind is the imposing Duomo, the elegant Galleria Vittorio Emanuele II and the latest fashion trends. All of the above are true and justified, as every place in the world has its signature landmarks and characteristics. But who would think that Milan has also its own canals? Indeed it has and these picturesque canals are called Navigli, just like the area that spreads around them, which is the center of Milan ‘s nightlife. It’s a picturesque area, full of casual restaurants and successive bars, with music and young crowds with a cocktail in hand spreading along the canal’s banks.

And even though they’re not as impressive as the ones in Venice, Milan’s two canals, Naviglio Grande and Naviglio Pavese have their own charm and vividness, especially as the sun sets. They are found in the south part of Lombardy’s capital and were opened – along with a whole canal network that is now covered by the road network – during the medieval times, in order to connect Milan with the lakes Como and Maggiore in the north, reaching all the way to Switzerland, carrying passengers as well as merchandise. Even the marble that was used in Duomo’s construction arrived in the city this way.

Nowadays, Navigli’s banks are ideal for a laid back stroll during the day and a popular destination for an evening aperitivo, when all bars and restaurants offer a rich and low cost buffet dinner option. A seemingly endless variety of cold and hot appetizers, salads, Italian cold cuts and cheeses, as well as light dishes, alternate since early in the evening, accompanying your drink or cocktail. It’s the time of day when the area is at its busiest and the young Milanese enjoy both the bars and paved alleys that spread around them, leading all the way to the canal banks.

But the area is also popular during daytime, full of interesting shops selling art-crafts and designer workshops, that are mostly found around the Darsena dock, where Milan’s old harbour used to be. There are also open markets, the biggest one being the antique flea market. It’s open every month’s last Sunday and is a truly unique experience.

Another authentic experience is walking along the atmospheric alley Vicolo dei Lavandai, which got its name from the ladies that used to do their laundry and washing at this part of the canal. You can even notice the chisseled stones on which they were rubbing the dirty clothes. The same sense of genuineness you will notice at the Palazzi di ringhiera, apartments with iron cast balconies that share the same yard, that give a romantic flair to the scenery of a night walk along the canals, when the lights reflect on the river’s waters.

Extra tip: Although the fastest way to reach the Navigli area from Milan’s center is by getting on tram 2 on Via Torino, one of the city’s main commercial roads, the best way – in order to have a complete view of the area and also see some interesting attractions along the way -is walk Via Torino all the way down, heading south. Following this course, will will pass the Basilica di San Lorenzo, dating in the 4th century and the impressive graffiti that give a modern touch to the area, the ancient Roman ruins of the Colonne di San Lorenzo, the magnificent Basilica di Sant’Eustorgio and the nearby Museo Diocesano and also pass through the impossing, neoclassic gate Arco di Porta Ticinese.

As for the numerous dining and drinking options around the Navigli, try to avoid the touristic traps you inevitably come across in such popular areas, and head to Ugo bar for its wonderful cocktails and its welcoming vibe, to GinO12 with its endless variety of rare gins and to Mag Cafe and Iter for their bohemian, relaxed atmosphere.