Monumental Complex Donnaregina: A tour from Gothic to Baroque 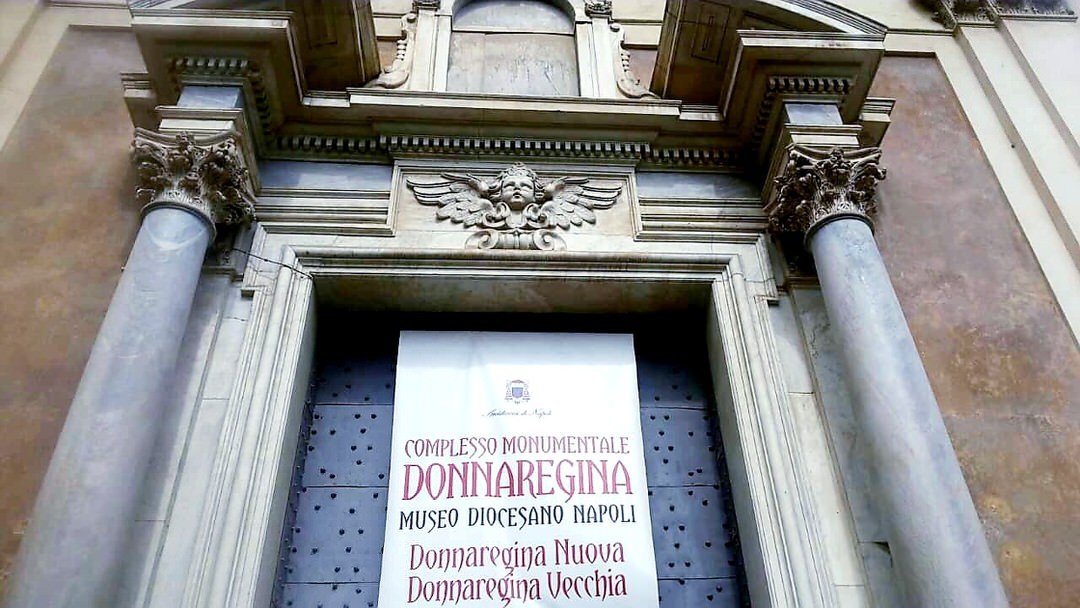 The area around Naples’ Duomo is the heart of the most original and old part of Naples. Three ancient roads remain from the Greek-Roman period, with countless, cobblestone, narrow alleys crossing them and forming a shady labyrinth, that invites you to get lost in it, explore it and give into its unrefined beauty. Moreover, the area is full of churches, literally one opposite the other, that so often hide unexpected treasures.
Such is the case with Donnaregina, a monumental complex of two churches and a museum, that gives a rare testimony of both Neapolitan art and the history of the Franciscan Order. The site comprises of Santa Maria Donnaregina Vecchia, Santa Maria Donnaregina Nuova and the Diocesan Museum. The terms “vecchia” and “nuova”, meaning ”old” and “new” are used to distinguish the adjacent churches that stand in the former site of an 8th century monastic complex. The simple, neoclassical exterior doesn’t reveal the ornate and elaborate interior.

Two statues, those of St. Bartholomew and St. Andrew, flank the entrance which leads to the newer of the two churches. This was built when an earthquake caused severe damage to the old church in 1293. It was then when Queen Mary of Hungary, wife of Charles II of Anjou, took the initiative to finance the build a new convent on the site for the nuns of Donnaregina Vecchia, declaring also her will to be buried on the premises. The fine baroque design of the new church is attributed to Giovanni Giacomo di Conforto and the large interior consists of a single nave with only six chapels, three on either side.

The spacious site is lavishly decorated with marble in pink and green tones, while Giovanni Ragozzino’s richly engraved altar draws immediately attention with its large proportions, elegant decoration and polychrome mosaic floor. Based on Francesco Solimena’s design, it is dominated by Luca Giordano’s magnificent altarpiece, rating the church among the most beautiful ones in Naples. Also worth noting are the large fresco on the ceiling by Francesco de Benedictis and the frescoes on the sides of the apse depicting scenes from St Francis’ life, also by Solimena.

Since 2007 the church has also been housing the Museo Diocesano di Napoli, displaying a collection of religious art and reliquary objects of fine beauty. Paintings of religious themes are gathered from other Neapolitan churches as well as from the Duomo and include works by Luca Giordano, Aniello Falcone, Andrea Vaccaro, Francesco Solimena, Massimo Stanzione, Charles Mellin, Mattia Preti and Paolo De Matteis. The rest of the collection is comprised by precious liturgical objects in gold and silver, crosses with precious gems, panels and sculptures. Laid across two floors, all exhibits are arranged and grouped together illustrating the most important themes of Christian faith. At the same time, you have a chance to admire the impressive baroque interior of Santa Maria Donnaregina Nuova from above.

The once connected by a passage churches, were separated around 1930 during a restoration project, which shifted the wall of the new choir forward and rebuilt a missing section of the old churches’ gothic apse. It was at that time when Queen Mary’s tomb’s monument was moved back to Santa Maria Donnaregina Vecchia. An Italian interpretation of the French Gothic style was chosen for the church that replaced the monastery that once stood there and is characteristic of 13th and 14th century, with pointed arches, tall and slim polygonal pillars that form three naves and a wooden roof. The left nave now houses Queen Mary’s tomb, a gothic monument with such elegance and fine proportions that is greatly admired today as much as it was at that times.

This magnificent work of art was commissioned to Sienese sculptors Tino di Camaino and Gagliardo Primario, consists of a sarcophagus representing Mary’s sons and is flanked by angels drawing back curtains to reveal the Queen’s peaceful figure. The sculpture is so elegant it looks like fine lacework and draws all the attention in the white, simple and austere church interior.

The second masterpiece to be admired in the old church is accessible through an external staircase and is a 14th century cycle of frescoes, the largest one to be preserved in Naples. Although their colours were damaged and became reddish by a fire caused by a lightening, Pietro Cavallini’s frescoes, along with some by Filippo Rusuti, cover the entire choir area with exquisitely depicted scenes of Christ’s Passion, the Last Judgement, Saints, Apostles and Prophets from the Old and New testimony. Particularly dramatic are the colourful scenes of St Ursula’s martyrdom set against a black wall. Finally, the capstone is the 16th century, carved, gilded wooden ceiling by Pietro Belverte, making a contrast with the white, bare walls of the gothic structure and best observed in detail from the choir area.

With so many works of art to admire, make sure you have two hours free for a complete tour from past to present, that the three complimentary institutions offer in a synergetic way. Two hours that will transfer you to the most serene environs, even though amidst the most vibrant part of the old city of Naples.