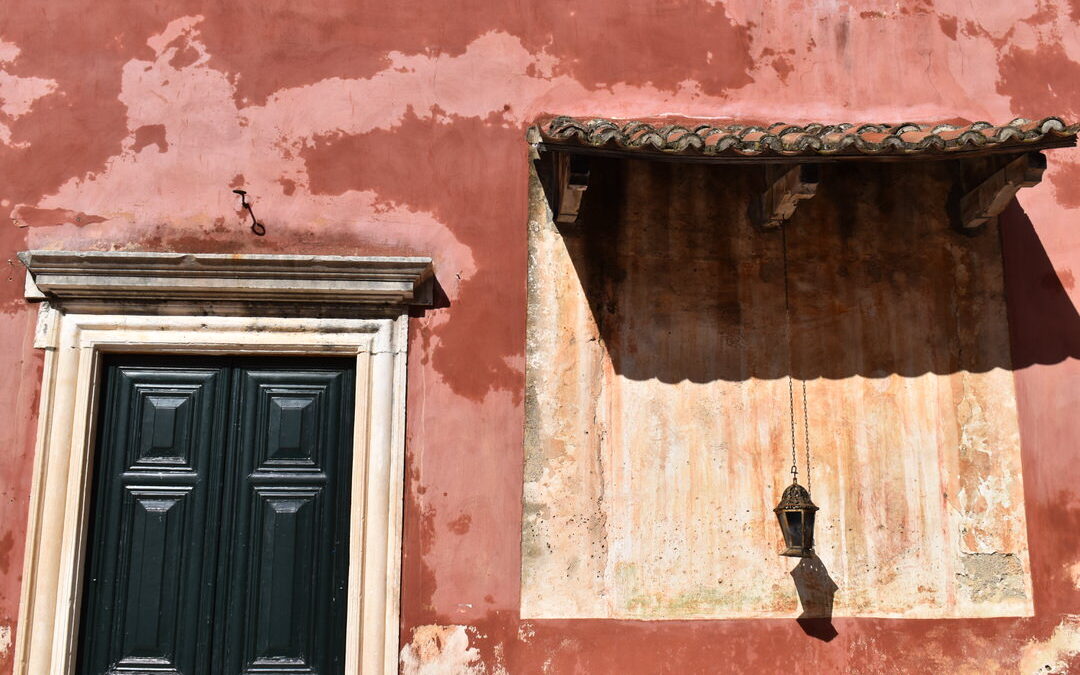 Welcome to the most picturesque and romantic part of the old town of Corfu, a charming tangle of labyrinthine alleys and staircases ( called “scalinades” ), dead ends and arched passages ( called “volta” ) and of course – as its name suggests – tiny squares. In Campiello all proportions change: alleys become even more narrow, buildings become taller and touch one another, laundry ropes multiply and the volume of all sounds decreases. But they all contribute in creating a unique experience for all senses.

Here you don’t just enjoy picturesque, perfectly framed images. Undoubtedly, your eyesight will be impressed by the sequence of pastel colours on the building walls. Pink, ochre, rusty red, salmon pink, light yellow on the exterior walls and light blue or dark green on doors and windows, they all create a lovely sight and remind us that in the old town of Corfu, which has been included by UNESCO among the World Heritage Sites since 2007, there is a specific colour palette that must be used for the buildings’ facades. But even a short stroll will also reveal that your olfaction will be enchanted by the tantalizing smells that pour out of the kitchens and your hearing will be delighted by melodies being practiced behind open windows. And it’s not unusual at all, in the small squares that have given the area its name ( Campiello=small square in Italian ) every now and then to come across small, amateur choirs that entertain passersby with their songs.

Let yourself go and enjoy the ambiance. Choose one of the atmospheric alleys that start from the old town’s centre and start ascending. Smile with the colourful zig zag of the laundries that hung above you, caress the lazy cats and most of all, let the buildings speak to you about the history of their Venetian habitats, that stayed in Corfu for 400 years. It was them that first chose to live on this hill, as due to its altitude it was benefited by the fresh sea breeze and offered better hygiene conditions.

An ideal starting point for a walk around Campiello would be Maniarizi-Arlioti st, a narrow alley that you’ll find vertically to the busy, commercial street Nikiforou Theotoki. With the soft peach-pink colour of its buildings and the excellent and discreet cafes, restaurants and art labs, it’s certainly one of the most picturesque alleys of Campiello. The fact that it has also kept its old name as the Kantouni of Bizis, clearly shows us its historic imprint: The name was given because of the aristocratic Bizis family who lived on no 22 of this street. Today, one can clearly notice the remaining stone arched passage ( volto in the Corfiot dialect ) which is decorated with an engraved head o the outside, while inside you can even see the family’s coat of arms. A few meters from this point the family used to own a second residence, which unfortunately was destroyed during World War II. But where does the word “volto” come from and what does it show us? It’s actually another Italian word adapted and incorporated into Corfiot everyday language, in order to describe the short or longer arched passages which can be found all over the old town. They also used to be a sign of power for the important families of that time and an opportunity to show off their wealth.

As we continue our stroll, further signs that indicate the area’s Venetian origins can be observed all around. Marble blazons and coats of arms, engraved fringes above or around house doors, an element commonly found in the aristocratic Italian residences of that time. You can even notice marble, engraved balconies if you look high. And the eyesight does certainly look high, because in this area the buildings’ height and the number of floor levels increases, an architectural element that was adopted in order to cover the housing needs of the constantly increasing population. Another historic information that the buildings’ architecture whispers to us, concerns the interior of the houses: if you take a glimpse through an open window and you notice beams across the wooden ceilings, then this is sign that the house belonged to a wealthy family, as in poorer houses the wooden ceiling were lacking of decorative details.

A few steps further and walking through another stone, more recent volto, the alley leads to one of the prettiest squares of Corfu, that of Panagia Kremasti. An amazing mixture of colours from the buildings and the hibiscus that leap out of every corner, frame the elaborate, marble Kremasti tank or Venetian well as it’s widely known today, that adorns the center of the square. But what attracts the attention is the faded red wall, with one single hanging oil lamp that used to form the present church’s exterior narthex. This also explains the square’s name as the church that dominates it, is that of “Hanging” Virgin Mary. As for the church itself, one theory claims that it got its name from an icon of Virgin Mary that used to be hanging on this wall you’re now looking at, while another attributes the name to the position of the church in relation to the surface’s level, as it gives the impression ( especially when you reach it climbing up the stairs ) that it’s hanging in the air.

The oldest part of the town of Corfu has so many stories to reveal from the times of Venetian rule.

As our walk continues through the beautiful yards and enclosed gardens of Campiello, the typical Corfiot palette continues to impress us at every step, as the charming mess of alleys lead us to one of the most significant churches of this area, the Holly Church of St Nicholas of the elderly, or San Nicolo dei Vecchi. It’s the church where the first Governor of Greece, Ioannis Kapodistrias was baptised, a single nave basilica with a wooden, tiled roof and an exterior narthex, built in the beginning of the 16th century. Here also, there are two theories about the origin of its name, the first being that this was the oldest church of the area dedicated to St Nickolas and the other pointing that this was the church where the council of the Elderly used to meet. Inside, you can admire one of the oldest, engraved, stone altarpieces as well as the marvelous religious painting “St Corfu”, depicted by Emmanuel Biounalis Tzanes.

When you exit the church and stand in the middle of the churchyard with the simple, tower bell, another characteristic image of Campiello unfolds before your eyes. Wide, stone staircases called ‘‘skalinades” in the Corfiot dialect ( another Italian word, scalinata = staircase ), houses with enclosed, private gardens and iron cast balconies, plenty of plants and flowers next to doorsteps and luckily, a map just outside the church, to guide you through your next steps.

Ascending towards Taxiarhis Square, you will pass by more tiny squares, which are actually courtyards of facing houses, where old ladies chat and catch up with the news of the day. The aristocratic families of Theotokis, Kapodistrias and Kokkinis that settled in the area in the 14th century, filled it with gorgeous townhouses and the only thing that was missing was a church. Unfortunately, the already damaged by a fire in 1545 church of Taxiarchis Michael that they built, was completely destroyed during a World War II bombing. In the area of that church, which was the most representative sample of an orthodox church of the Venetian era, we can see today that of dedicated to Almighty, in a typical Ionian style. The sculpture of an angel on its top is the work of the Italian sculpture Toreti, was added in the 18th century and it’s one of the main characteristics of the church, honoring Archangel Michael.

Walking a few metres further from this point, the Kokkinis volto awaits you. An why is it called Kokkinis? Simply because the Kokkinis family, with Byzantine origins, lived there. Part of the volto remains exactly as it was in those days. Antonios Kokkinis was the noble man who donated to the city of Corfu the marble, Venetian well we saw earlier, while a small village on the road to Ermones – Glyfada is also named after the same family.

Not too far from this point another sight worth visiting is the church of Virgin Antivouniotissa, one of the oldest and most important religious monuments of Corfu, today housing the Byzantine Museum. The exterior narthex remains and surround the three sides of the church, forming a serene and peaceful atrium, while there are also plenty family tombs of wealthy Corfiots and high rank clergymen. Look for the engraved large stones on the floor of both the narthex and the nave, some of them embossed with the names and emblems of noble families and you’ll realise how the history of this church is closely linked to the very history of the island. The museum covers five centuries of religious, cultural expression and is a place where one can admire significant art creations and witness that despite the promotion of the Catholic dogma, the Byzantine tradition lived on.

When exiting the church, stand for a while on the top of its own scalinada and you’ll realise that you have now reached the area called Mouragia. This is another Italian word – muraglia – describing the northern, coastal, Venetian walls built between 1577-1588. The view of the Ionian sea and the verdant Vido island that spreads in front of you, is idyllic and totally appropriate for another wonderful walk, this time returning to the openness of Spianada Square and Liston.